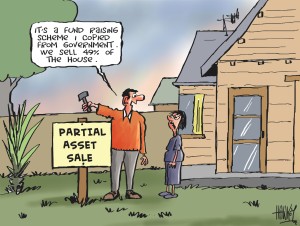 I’m not the sharpest carrot in the vegie patch, but even a dull-eyed, mouth breather like myself can see through the 10 Step Plan to privatise publicly owned assets:

Step 2: Opposition gets elected then announces findings from private study ie: their own Think Tank, which reveals there is no alternative but to sell publicly owned assets. Ignores howls of protest from ‘the rabble’, aka: the voters who believed their promise about retaining publicly owned assets.

Step 4: Massive staff cuts are followed by regional branch closures and tripling of fees and charges in order to ‘Improve Customer Service’.

Step 5: Managers’ yearly salary is quadrupled because ‘If you pay peanuts you get monkeys’. Ground floor staff ask for a small cost of living pay increase, and are immediately branded greedy, non-team players.

Step 7: Wheels fall off. Manager and board take no responsibility, but demand financial assistance from Government, or from foreign investors, because company is ‘Too Big to Fail’.

Meanwhile, I scratch my thick head and wonder if publicly owned assets are posting profits why are we getting rid of them, and if they’re not profitable, who’d want to buy them?

At the risk of being booted out of Oz I’m going to confess that I actually don’t love a sunburnt country, because growing up in soaking wet Innisfail really hasn’t prepared me for life in a semi-parched climate.

Living in Central Queensland has also taught me that hurling the remote at our television during the evening weather report has done very little to improve the chances of rain, or Long Suffering Wife’s nervous condition.

Which is why I heartily applaud people like my mate Jeannie K.

Jeannie is one of those sickeningly joyful folk who brings sunshine wherever she goes; although more sunshine isn’t exactly what is needed in our drought wracked outback at the moment.

Seeing disasters as challenges to be overcome with gusto, Jeannie is the sort of person who would immediately organise a sing-a-long in the life boat as the cruise ship sank. Basically, someone we cynics would cheerfully beat up, if we weren’t too busy trying to clap in time with the music.

After seeing the plight of our farmers, Jeannie, swung into action. Assisted by her mate Yvonne, Jeannie scribbled down the names of some very talented local entertainers, calculated how much dirt she had on each of them, then blackmailed them into joining their drought relief ‘FUNdraiser’.

And last Saturday night, ironically after a week of rain, they gathered together for a hoedown in town to raise some bucks for the bush. And while they’re still not flush with floods around the Longreach district, at least they’ve got some cash to splash about now.

So if you’ve grown tired of hurling abuse at an uncaring Mother Nature, then please call Jeannie on: 0408 893 377, and watch her magically turn your spare change into hay bales, fuel, and food, which will put smiles on some very dusty dials.