Anna Bligh is coming to Gladstone – but not by road… 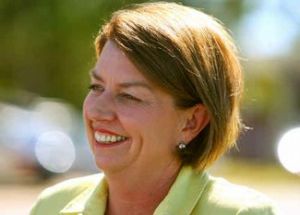 Last week the Gladstone Observer informed us that the Premier was coming to Gladstone for a 3 day visit.  Unfortunately details of where she will be holding meetings, forums and Q&A sessions haven’t been forthcoming.  I’m not surprised, I’m a Qld’er, we’re used to being told nothing…

Like not being told before the election that our leaders were planning to sell off State owned assets: Qld Rail, and State Forests to private interests (I’ve already posted on this topic here: https://gladbloke.wordpress.com/2010/04/30/did-bligh-lie/  )

Yes, I’m still angry about it.  As a long term Labour supporter (who is now considering Anarchy the only viable political option I’ve got left!) I’ve been appalled at the world wide trend of what used to be the ‘Workers Party’ to swing so far to the right spectrum of politics that we are basically voting for a slightly pink version of the blue Liberal/Conservative parties.  Tony Blair, Obama, Kevin Rudd, Julia Gillard, and Anna Bligh have as much empathy, and similarity, to the working classes they purport to represent as a fox does towards chickens.  They only appear to be interested in meeting with business representatives and lobbyists (and possibly charging accordingly).  Anna’s comments in the paper prove this:  “I’m looking forward to spending some time in the area, meeting with the area’s business leaders…”  http://www.gladstoneobserver.com.au/story/2011/04/20/annas-coming-town/

Trust is a fragile thing.  And if you have proven that you are unable to be trusted, and have lied about your true intentions, and worst of all, are prepared to sell out your own principles, then you my friend, are someone I don’t want in my home, or any part of my life.

So, this week, if given the chance, I hope to stand up with others in my home town who hold similar views.  No big change ever occurred without the courage of a principled few who decided that ‘Enough is Enough’.  It didn’t come from compromising your principles and treating your followers with contempt.

Many long term Labor folk I know have all but given up on the politics at all levels, but I think this is playing into their hands.  When people shut themselves off from the political process, the powers that be (Left or Right) will continue to treat the ‘sheeple’ with continued contempt, without any fear of reprisal, or reprimand.

Until an election looms 🙂

As a lad, I wanted to be a ‘firey’, and last week I was given a crash course in fire training at the ERGT training facility south of Perth ( web site:  http://www.ergt.com.au/ ).

The trainers, Gav, Nathan, Arek, Nathan and Ben were brilliant, and the course was more hands on than theory, which was a far cry from any other previous fire training I’d done, and certainly gave the training a ‘we don’t f*ck around’ element.  Particularly on the last day when we had to use all the skills we’d learned in the previous two days to enter burning buildings to fight fires and rescue victims (funny how light those rescue dummies became when the adrenalin was pumping!)

Most of the other trainees were oil rig workers, and it was fascinating listening to their stories about life on the rigs during our breaks.  But after three days I decided on two things:

These two shots were taken by my new mate Sam.

For some reason I had an urge to pour a jug of water down the front of my pants then walk about flapping my arms crying "Wah, Wah, Wah!"

My 'Boys Own' adventure becomes reality...

Thoughts on Planning a Novel

I’ve been trying to write a novel for several years now.  I’ve got 4 first drafts of it, all of them bad, but they’re getting better.  Had I published it several years ago, I would be unable to read it now.

Because there were too many plot holes, not enough accurate information to make the story believable (yes, I want it to be ‘right’), and the dialogue was patchy and sadly, preachy.

Paul McCartney said this: We practiced and played great blues songs, imitating our heroes, and eventually our own voices came through, our own distinct sound.

That’s my goal.  To keep aping my betters until my own sound rings through the din.  And now, I’m starting to hear faint traces of that voice.

I’m hoping to hear a lot more of that voice in the next draft.  I can’t wait!