When I was a lad it seemed like every adult was a smoker, except for my mother, but Grandad managed to smoke enough for her, plus all of us kids and our pets.  He did quite well considering how short his life was.

Back in the day, our homes were littered with ashtrays, every pub and restaurant had a solid blue fog wafting over them, and the smell of Sunday roasts competed with the pong of tobacco smoke.

The seventies was also a time when smokers kicked the habit in huge numbers, as the medical profession finally got their message across about the dangers of smoking; particularly while wearing highly flammable polyester clothing.

And as the number of older smokers continues to plummet faster than a stunned duck, for some reason, many teens and young adults are taking it up.  Are they insane?!  It’s not as if they haven’t been warned!  Plus there’s practically nowhere in public you can light up these days without risking verbal and/or physical abuse.

And if smoking doesn’t take your breath away, then the price of them surely will.  Just in case you haven’t kept up with ‘smokeflation’, each cigarette costs roughly 92 cents nowadays!  Which explains why nobody leaves their packs of smokes on the bar when they pop off to the toilet anymore; you might as well leave your open wallet unattended.

Fortunately, smoking is a dying habit, and sooner or later, everyone will quit; in some cases voluntarily.  And years from now, future generations will look back in bewilderment at our addiction to this toxic habit, and I’ll give them this time tested excuse, “Everyone else was doing it and it seemed like a good idea at the time.”

Which, by the way, also comes in handy for explaining why I handed over good money in the Seventies to watch ‘Carry On’ movies.

The Man In White is ALWAYS… right?

“Who stole my whistle?!”

The man in white is always right, even when he’s totally wrong.  And a big part of sportsmanship is learning to maintain your respect for the one-eyed dribbling drongo who has just destroyed your chances of winning.

Look, being a referee is tough.  You’re putting your ability to spot fouls, and make calls on split second actions, on public display.  Then there’s the added pressure of sports bets worth millions, psychotic fans, helicopter parents, and players pumped full of ‘God knows what’, clouding your judgement.

As someone who has trouble on a daily basis finding the Vegemite jar sitting in the middle of the top shelf of the fridge, I realise mistakes are easy to make.  But once a call is made, it’s set in stone.  Of course, this won’t stop players, coaches, supporters, or any other passer-by with an axe to grind, from arguing, or giving the ref a piece of their tiny minds.

Should a ref buckle and change their decision, from that point on, every call they make will be the subject of an on-field debate, and games that were supposed to last ninety minutes will become an all-day event involving teams of lawyers, eg: American football.

Every player can recall times they’ve been on the wrong side of a bad decision.  And true sportsmen (and women) channel their energies into trying a bit harder, instead of carrying on like pork chops, aka: ‘Doing a Geoff Toovey’.

But the same individuals squealing for justice tend to go very quiet when asked about dodgy calls, or fouls, they got away with.  If pressed, they’ll grudgingly mumble, “Well, that’s the game isn’t it?”

The only alternative is to let computers control games, but imagine dealing with a soulless machine that is never wrong?  Honestly, you wouldn’t stand a sporting chance, and where’s the fun in that?

Last Thursday night at Bray Manor we received a recorded phone call from Tony Abbott asking for our votes.  Slamming down the phone I cried, “That’s it!  Pack the car, we’re outta here!”

We sought political refuge at Agnes Waters, and fortunately the locals didn’t turn us away, or worse, redirect us to some hell-hole for ‘processing’.  Quite the opposite in fact.  As we got out of the car, a young lass in a bikini skateboarded by and called out brightly, “Enjoy your stay!”  Well, I’ve definitely had worse welcomes!

Watching her disappear down the road, I mentally calculated how much of her exposed body was at risk of second degree gravel rash, until my thoughts were interrupted by ‘a certain party’ nudging me in the ribs and telling me to stop perving.

The next morning, as we sauntered towards the beach, we spied a young bloke carefully picking up large pieces of glass off the road and putting them onto his skateboard.  I was so impressed that I gave him a hand.

“Ta,” he said, then added, “you know, I reckon that if you see rubbish and don’t pick it up, then you might as well have thrown it yourself.”  He dumped the bits of broken bottle into a nearby bin, then waved goodbye as he skated merrily away.

On Sunday afternoon, while Mr. Abbott hung a portrait of Rupert in Kirribilli House, and organised the fumigators to cleanse The Lodge of any strands of bright red hair, we puttered back home.  And on the way, I thought of the marvellous lesson those kids had taught us:  that regardless of who is in power, it’s the individuals cheerfully going the extra mile who make a positive difference to our communities.

Perhaps it’s time I dusted off my old skateboard? 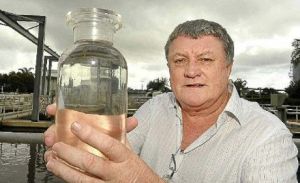 Note to self: “Jim, if Greg Bray hands you another glass of water, Don’t Drink IT!”

In the course of a rather dull and uninteresting life I’ve met a couple of politicians.  Notably, Tim Fischer who shook my hand after mistaking me for someone else, and once I chatted with Mark Latham, long before he became the twisted train wreck we all know, and avoid, today.

But the funniest encounter occurred back in 1994 when we were living in South Brisbane.  One sunny Saturday afternoon, while I was out toiling in the garden, a familiar figure came staggering up our garden path.  Thrusting out his hand he said, “Hello, I’m Lord Mayor Jim Soorley, and I’m campaigning for re-election.”  He firmly pumped my gloved hand, squishing quite a lot of cow poo into his own palm.

He stared at his fingers in disgust, then started sniffing the air and crinkling his nose; obviously my deodorant had stopped cutting the mustard.

As he washed his hands under the hose, I popped inside to fetch a couple of glasses of water and give my underarms another quick spray.  Jim downed the water, screwed up his face, stared at the glass, coughed, sniffed the glass then handed it back to me with a dubious look on his dial.

“We usually boil it to get rid of the taste,” I told him, “but I thought you might want to experience firsthand what your residents are drinking.  Want another one?”

“Hell, no!” he cried, then shuffled off next door.

Watching him go, I reflected on how every few years, politicians must dread having to mingle with the great unwashed masses, getting their hands mucky, and often ending up with a bitter taste in their mouths.

I continued raking manure as Lord Jim pleaded with my neighbours for another term in office.  Well, it’s a dirty job, but someone’s got to do it, and I’m glad it’s not me!