Years ago when we announced to our friends in Brisbane that we were moving back here, their general reaction was: “Gladstone?! Did you lose a bet? Gladstone?! Surely things aren’t ‘that’ bad? I mean… Gladstone?!”

Now half the country wants to move here.

The local population has swollen to the point where at a recent public function, which I’d like to add was non-courthouse related, it occurred to me that there were quite a lot of folk I didn’t know. It felt strange to gaze into a crowd and not know most of them, having become accustomed to seeing the usual collection of familiar mugs I knew from my school days and workplaces.

Just as I was starting to wonder if my memory was fading faster than cheap paint on a Queensland roof, an old mate wandered up, shook my hand and asked, “Who on earth are all these people?” Now, he’s a third generation local, (his sixth finger hasn’t quite formed yet), and I was quite relieved to hear that I wasn’t the only person baffled by the sea of new faces.

Anyway, we both agreed that most of them must have arrived as part of the latest gas boom, (hopefully the only ‘Boom!’ to be associated with this new industry). And, as in the past, a lot of these workers will have arrived with two aims in mind:

1. To quickly earn the sort of money that would make Donald Trump envious, and,

2. To get out of Gladstone as soon as possible.

Years later many of them will still be here, planning to move, or retire, to somewhere else, but not just yet… perhaps next year, well, definitely the year after. And those who do go, quite often come back, often with sheepish looks after having vowed on a stack of Bibles never to return. Having left and come back myself, I’m something of an authority on the subject.

Gladstone may be a hard place to love, but it’s a lot harder place to leave.  And I’ve been back long enough to have learned a great deal of interesting stuff about this place and its’ people, and will accept quite a lot of money to keep that information to myself.

I’ll sling that cash straight into my retirement fund; I’m not sure where we’ll move to, but until we decide, we’ll just stay right here.

We Gladstonians are very good at waiting.  In fact, we’re famous for it, particularly if the title of our towns’ history book is any indication:  “Gladstone… City that Waited.”

We’ve been waiting for things to happen here ever since Captain O’Connell landed up to his knee-caps in mud at Barney Point in 1854 and announced to the astonished natives that they were now, a) Ruled by the British Empire, and b) Evicted. 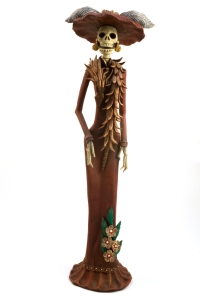 Elspeth's new dress was slightly out of fashion by the time it reached Gladstone.

Then, without submitting an environmental impact assessment, O’Connell set about making radical changes to the countryside and harbour foreshores, and handing out high paying jobs to the huge workforce of Sail In Sail Out workers, aka: SISO’s (the original ‘blow ins’).

Those early settlers had to put up with a serious shortage of food, housing, schools and pubs.  Water charges were steep, and their roads were little better than heavily pot-holed tracks.  Sailing ships took days to deliver supplies, before returning to Brisbane loaded with tonnes of bureaucratic paperwork, and, if there was room, anyone who needed urgent medical attention.

Meanwhile the government of the day increased taxes, backstabbed each other, granted themselves pay increases, and bickered over trifling issues.  How things have changed!

Today our goodies are loaded onto fleets of fast moving trucks and trains in Brisbane and sent to far flung locations before arriving here, much-battered and worse for wear, several weeks later.  And nowadays, any Gladstone residents who need medical help are no longer sailed to Brisbane; instead they are carted over a heavily pot-holed track to Rockhampton.

And while we wait for a hospital upgrade, dredging of the Boyne River mouth, affordable housing, and funding to make the Calliope Crossroads marginally safer than competing in a demolition derby, the government waits for another major corporation to cough up the cash, while increasing taxes, backstabbing each other, giving themselves pay increases, and bickering over trifling issues eg: a tax on hot air, and superfast internet.

For those of you without a good calendar, I feel I ought to warn you that tomorrow is Mothers’ Day and, unlike Fathers’ Day, this is the one day of the year that you really can’t afford ignore.

Mothers are wonderful.  They kept you safe, warm and fed as a little tacker, saw to it that you avoided bad company, helped you with your homework, and patched you up when you came home with any number of injuries.  Not once did my mother complain when I came home bawling in pain, trailing blood, mud, dirt and go-kart parts through the house, propped up by a swarm of mates who were keen to see what would happen next.

Mum would calmly mummify me with bandages and iodine, then set about cleaning the blood and grease stains off her rugs, lino, and walls while the rest of us sat plopped in front of tele shovelling food into our faces; it almost made getting injured worthwhile.

And no-one else cooks like your Mum.  I’ve seen grown men come to blows over whose mother makes the best stew, because there’s no stew like Mothers’ stew.  Honestly it’s a silly thing to be fighting over, especially when it’s a well known fact that my Mum makes the worlds’ best stew; with sultanas in it!

And Mums care, they really are ‘The Last Chance Saloon’ in the Town ofLife.  When everyone else has given up on you, good ol’ Mum will always have something nice to say about you, even if it is how neat and tidy you’re keeping your jail cell these days.

Tomorrow you should go out of your way to make Mum feel special, because in addition to all the good things I’ve mentioned about mothers, I’d also like to point out that mums’ also happen to know quite a lot of stuff about you, personal things you might not want her mentioning to your children, friends, workmates, or passing strangers.

So, build, make or buy your Mum something nice to say ‘Thanks’, particularly for all the times she threatened to brain you with the wooden spoon, but didn’t.  She’ll be grateful, and if you’re really lucky, you’ll not only buy another year of her silence regarding your delicate personal information, but she might also dish you up an extra helping of world class stew, with extra sultanas.

Well I’m back in print, but with one difference… I’m no longer the Monday Columnist.  The column appears in Saturdays’ Observer, along with columns from the other 3 contributors.  No feedback on the new slot yet!

It was Queen Elizabeth’s birthday recently and I found myself wondering just how hard it must be for her loved ones to pick a present for her; seriously, what do you give the worlds’ richest woman?  Obviously scented talc from the chemist is out for starters.

And they’ve got a few more years of gift related stress ahead of them, because there’s no reason why QE2 shouldn’t live to see one hundred, and get to send herself a congratulatory telegram.

Meanwhile Liz soldiers on, refusing point blank to retire, no matter how much her oldest son hopes she’ll step down off the throne and spend more time in the royal garden; ordering the royal gardeners about from the comfort of her royal deck chair.

And why should she retire?  It’s not like she actually works for a living, or has to put up with the countless stresses which sap the life out of the rest of us mere mortals on a daily basis, eg: red lights, poor service at restaurants, shonky health care, and waiting in line at the Department of Transport.

Who wouldn’t be reluctant to give up living the sort of life where no-one would ever think of asking you to unblock the royal dunny, or clean out the royal budgie cage?

So, I’m betting that for some time yet the British anthem will continue to be ‘God Save the Queen’, although I’m still unsure what she needs saving from.  However, I have noticed that since we stopped singing that particular anthem here in Oz, her Commonwealth, and personal life, have taken a bit of a battering.  Coincidence?

Perhaps this explains why not many people these days keep a special tea set aside in case the Queen pops in for a cuppa between royal engagements.  But I haven’t quite given up hope of hosting the ultimate high tea, and still keep a special mug handy because you never know… perhaps Will and Kate might visit Bray Manor after their honeymoon and they can use it, in fact I might even give it to them as a wedding gift.

Maybe they’ll re-wrap it and present it to Liz as a late birthday present.  I’ll bet no one has ever given HRH a slightly chipped mug with a fuzzy photo of Barney Point beach at low tide on the side of it.  I reckon she’d be ‘very amused’ indeed.