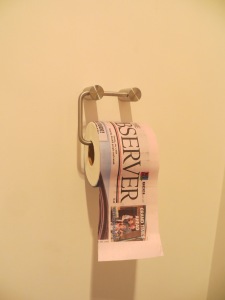 Editor in Briefs, Al Summer, made the bold decision after being told that locals didn’t think his paper was good enough to wipe their bottoms. “Well, it is now!” he declared from his bunker deep in the bowels of the Sobserver office block.

“Even though we’re plumbing new depths by going from a broadsheet to a two-ply sheet, we’ll still be covering the same crap,” added Mr. Summer, “but with a slightly softer touch, and much less smearing.”

Sadstone Sobserver Rolls can be purchased singly, or in packs of ten.