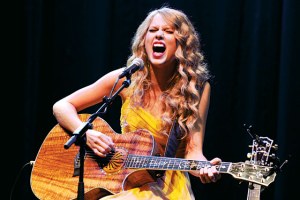 What happens when you play a country song backwards?  Your dog doesn’t die, your wife comes home and the tractor starts.

Oddly enough, last Friday when I left home, Long Suffering Wife didn’t look the least bit upset.  As I drove off into the sunset, she did a little jig of sorrow on the footpath then raced inside to put her feet up and enjoy some quality time with various battery operated devices; my TV remote, laptop and phone.  Meanwhile, I headed ‘Yonder’ where none of those things would work.

‘Yonder’ is fifty metres west of the bustling metropolis of Ubobo, and this year over five hundred cowboy hat wearing, boot stomping, guitar toting folk were herded into the grounds of the Boyne Valley Discovery Centre to enjoy the Country Music Campout.

As the cheerful volunteers toiled to keep the amenities blocks clean and roast several tonnes of locally produced vittles, the rest of us enjoyed a knee slapping, hand clapping, good time.  We sang late into the night, swapped yarns, and told whopping lies to strangers.

Now I didn’t have a turn on stage, but I did attract quite a lot of attention by drunkenly declaring that I wanted to represent the region as a Greens candidate.  In the shocked silence that followed, I quickly sobered up and announced that I was joking.  To my relief, the mob eventually lowered their pitchforks and shotguns; well, most of them.

Later, as I lay under an old ironbark gazing up at the stars, I called out to my neighbours, “Hey!  If a falling branch kills me during the night, could someone tell my wife that her car didn’t get damaged?”  That got a lot of laughs, even though I was being serious.

Mind you, it would make a great country song.