NRL MUM about ‘Banning the Biff’ 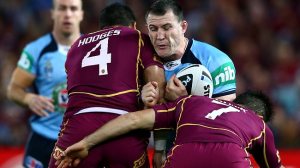 Recently the NRL decided to ‘Ban the Biff’, because they’re worried that mothers won’t let their boys play a game that tolerates thuggery.  Apparently it has nothing at all to do with trying to stop the Qld Origin team from giving Paul ‘Pouty’ Gallen the sort of battering a barra experiences when it’s washed over the Awoonga Dam wall.

Clearly the NRL bosses have lost touch with their fan base, because not only do many footy mums condone violence, they actively encourage it, and quite often participate.

Even in my extremely short Rugby League career, I’ve seen numerous confrontations involving enraged mothers, including one who ran onto the field to slap into a teammate who she thought was tackling her precious little brat too roughly.

It’s a bit of a tricky situation for a footballer, because going the biff on a mum who’s carrying a bub on one hip is always going to make you look like a bit of a monster.

Even on the sidelines things can quickly get out of control.  A mate of mine once politely asked some footy mums to tone down their language and ended up in the fight of his life when they attacked him.

Look, during a tight game, in the heat of the moment, when the bloods’ really pumping and Mr. Brain is having a smoko break, the fists might fly.  That’s footy.  But what Paul Gallen did to Nate Myles in Origin 1 wasn’t ‘the Biff’, it was typical, pre-meditated, ‘Pouty’ thuggery; possibly because Myles poked his tongue at him six years ago, or something just as ridiculous.

And having got away with it, ‘Pouty’ is now safe from retaliation thanks to the NRL’s strict new anti-biff rules.  Obviously Gallen’s got some serious anger issues to work through, and I suspect one of them might be popping up in the car park after tonight’s game; in the shape of Nate Myles’ mum.