Over the Xmas period, when time allowed in our hectic schedule, I read several books, notably, Joe Bageants’ ‘Deer Hunting With Jesus – Dispatches from America’s Class War’, and then backed it up with ‘Things Bogans Like’ by… well, I’m not too sure who the author is, because they didn’t appear too keen to put their name on the book; and after reading it, I now know why. 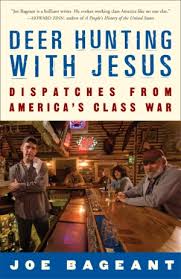 Joe returned to his hometown, Winchester, in rural Virginia, and wrote about the struggle of the working poor there, and their history in the region.  For the most part he paints a bleak picture.  Lack of health care, expensive real estate, loan shark scams, and brutal industrial relations policies have literally beggared the working classes, not only in Winchester, but throughout America.  The Haves, have roundly beaten down the Have Nots.

And here in Oz, they’ve found someone else happy to ‘sink the boot’ into the downtrodden.

Feeling the need for some light relief, I opened the pages of ‘What Bogans Like’, and after finishing it, felt a little disgusted.  The very people Joe described in Deer Hunting, were being held up again for ridicule by another elitist who sneers down on the chattering classes.

Joe says, if you must look down on someone, then instead of looking on them in disgust and fear, try helping them up instead.  Ignorance is a deadly trap.  Particularly for the Redneck / Bogan, who  can see all this stuff happening around them, but you don’t know why, and when they try to find out, are lied to, mislead, or betrayed.  Often, the first plane flight for the lower classes is the one taking them to Iraq or Afghanistan (or anywhere else their rulers want to ship them to fight their dirty wars).

Maybe I was wrong, perhaps Bogans is actually a cheeky guide on how to avoid the many traps set in front of the poor, gullible, uneducated and desperate by the numerous sharks, corporations, and dodgy businesses, determined to keep milking the Bogan cash cows.  If it was written with that aim in mind, then they’ve missed their target by miles.

Both books dealt with people in the lower economic, educational & social stratas, but while one offered a helping hand, the other did nothing but make fun of an already humiliated and over exploited group.

In the next few weeks, I’ll do what many Bogans do, reach for the remote control, some fatty snack foods, and probably a little alcohol to self medicate my frustration and lighten up a little.  Old Caesar was right, give the prols Bread and Circuses to keep them from thinking, getting upset, and toying with revolution.

Nothing has changed really 🙂