I make a lot of fun at other peoples’ expense (as well as my own), but this group deserves all the support they can get.  Never have I been involved with such a supportive, encouraging, and dedicated group of people.  People who are putting the ‘try‘ into Gladstone’s country music scene, and every week they motivate someone new to ‘try‘ getting up and having a go in front of the mic, usually with amazing results.

They’ve won me over, and I’m not all that big a fan of country music 🙂

Of late I’ve been spending my Tuesday nights down at the QRI Hall in Off Street, where a large group of fun loving, and talented, people gather to play country music.  These poor sods have become the latest social group that I’ve foisted myself on. 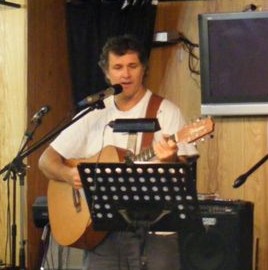 He sings! He plays guitar! He tells bad jokes...

Having been encouraged to get up and sing, I’ve noticed that a strange phenomenon occurs on stage; at home in the shower, my voice can only be described as ‘Godlike’, but on stage it seems to lose its’ tone, pitch and quality.  Apparently the stage is where the rubber meets the road; which would explain all the skid marks on the floor around the microphone stand.

Fortunately, an extremely competent backing band covers any little mistakes I make, even when I play my guitar like a drunken chimpanzee banging a drum.  And the audience is usually very stirred by my performances; because I’ve never heard a crowd clap so hard when I finish singing and wander off stage.

It’s a far cry from my earlier musical career.  For a short time I was in a rock band, but frankly, they were pretty hopeless.  Among other things, they couldn’t keep proper time.  I’d finish playing a song, only to discover that the rest of them were a long way behind me, so I had to stand about like a dill while they caught up.  Instead of picking up their act, they blamed my timing.  Unbelievable!

The final straw came after I played them a classic heartbreaker I’d spent weeks composing.  As the last note rang out, and tears flowed down my cheeks, one of them said, “Now that you’ve finished tuning up, how about playing us that song you’ve written?”

Also I’m pretty sure that I’m the only guitarist in town who didn’t play in Country Sound, a local band that has been around longer, and had more people go through it than Madonna.  Anyone who could play a guitar, banjo, or a piece of string tied to a broom got to join, yet, for some reason, I was never asked.

Which is why I’ve been enjoying the enthusiastic support from the Country Music mob, and they’ve even asked me to compete in the Gladstone Country Music Festival next February.  Apparently, if I go on first it will relax the nerves of my fellow competitors… although I’m not sure how?