Watching recent financial trends is making me a little worried.  So worried in fact, that I’ve been considering converting all my shares into solid gold.  I wonder how much gold my one dollar and thirty five cents will buy these days?

Actually, I don’t have anywhere near that much money invested, because, as anyone who knows me will confirm, I’m no financial whiz.  But what I do know is, that where there is money, greed follows closely behind, and greedy people will do anything for more money; a lesson I learned from playing Monopoly as a lad.

Monopoly was a great revealer of financial character.  The fun generally started with the punch-up over who got to be the race car.  Needless to say, the person who was satisfied with being the little Iron token was immediately treated like a doormat by all the other combatants. 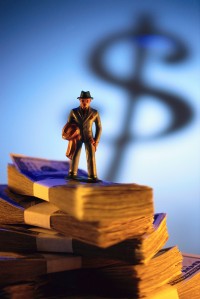 Then there was the kid who always had to be the banker.  He was usually hopeless at sports, but harboured a secret desire to be popular, or failing that; ALL POWERFUL.  In short, the sort of person who grew up to be a ruthless dictator, a power crazed referee, or worse, a parking inspector.

So, while he was buying properties with feverish intensity, I’d be skidding my race car token around the board, making the appropriate accompanying noises, and quickly going broke.

The banker would do practically anything to keep the game going in order to maintain his control.  Even when the rest of us had no properties, or any hope of paying our rents, he’d create IOU’s on worthless bits of paper, or hand out free money in order to keep us from giving up in disgust and wandering off to play cricket.  If he was really desperate, he’d even let me crash my race car through his neatly stacked hotels.

And lately, watching Governments around the world borrowing ludicrous amounts of money, which they can’t possibly afford to pay back, I’ve got that familiar sinking feeling that the end of the global Monopoly game is nigh.  Sooner or later, a lot of countries are going to realise that their situation is utterly hopeless, then throw their hands in the air and go off and play cricket.

With that in mind, I’ll think I’ll invest my $1.35 with a dodgy cricket team, because ‘Bucks for Ducks’ appears to be the only solid gold investment left these days.