Last Sunday I joined several fellow Gladstonians for the inaugural Botanic to Bridge run.  4500 of them!  Go Gladstone!

Training was hindered by things totally beyond my control: bad weather, sleep ins, dicky knee, an election, potato chip eating contests, planetary alignment, etc.  So I devised a new exercise plan based on re-runs of the Karate Kid.  Polishing the car, (wax on, wax off), and painting inside our house, (roller up, roller down).  That Mr. Miyagi was an idiot!  Does anything from the movies actually work? 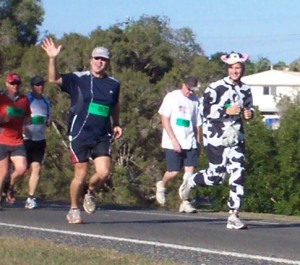 Ready or not, I and my running partner, a young fella who for some reason was dressed as a cow (complete with udders), joined 1200 other enthusiasts at the gardens for the 8 klm event.

As the seconds ticked down to the start time, I relaxed by snickering at the poor wretches lined up cross legged outside the demountable dunnies, who were clearly torn between wanting to join us, and an extremely heartfelt desire not to wet their pants during the run.

The last time I saw the bloke who won the race was two seconds after the start when he vanished over the horizon.  He was probably crossing the finish line while we were still shuffling up ‘Heartbreak Hill #1’.

The ‘cow’ boy and I puttered onward, waving to the kids, and hearing nearly every cow joke in creation.  At the Duck Ponds, the sight and sound of 3000+ people cheering us on gave me a much needed boost which kept me bounding all the way round the corner to the Bowls Club, where out of sight of the encouraging throng, I returned to my Frankenstein-like lurching run.

The ‘cow’ boy galloped off, leaving me to hobble on alone, and crawling up Goondoon Street, I was extremely disappointed to note that neither the Queens, or Grand Hotel, were dispensing ‘refreshments’ to weary runners.

Re-united with the ‘cow’ boy at the finish line, we had a bit of a decko through the Healthy Living Expo, and, unable to find a beer tent, we ended up cheering on the runners of the 3 klm event.

Anyway, a huge ‘Well Done’ to all the wonderful folk who worked so hard behind the scenes to bring this event off, and I’ve already decided on next years pre-run training plan; painting the outside of our house, (up the ladder, down the ladder).  You’ve been warned!