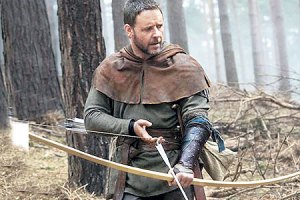 Thanks to a rainy day bringing my running, and painting schedule to a halt, I decided on impulse to go to the movies and see the latest Robin Hood.

Not a bad yarn.  As one mate described it, it was like Braveheart meets Gladiator.  A rather apt despcription I thought.

Younger viewers were disappointed by the lack of bloodshed and fighting, “There were only four fight scenes,” was one comment I overheard.  Perhaps this is more of a commentary on our youth, than the movie itself?!

Kevin Durand, the 6 foot, 6 inch giant who played Little John was a favourite of mine from Wild Hogs.  He has a few genuinely funny lines which he pulled off well.  The rest of the Merry Men seemed to pale into the background by comparison, rarely seen or heard.

I enjoyed a few laughs, whilst enduring another ‘Hollywood History Lesson’, relished the accuracy of the settings and costumes, and in general, enjoyed a rolicking couple of hours watching the goodies take a few hits before wiping out the baddies.  And best of all I didn’t have to listen to Bryan Adams singing ‘Everything I Do’ 🙂

The ending left more than enough room for a sequel.