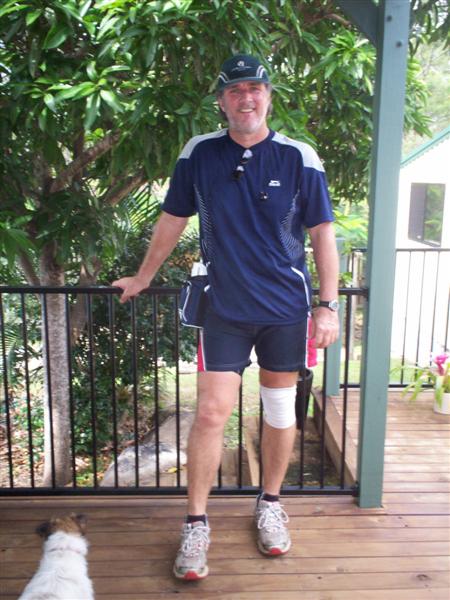 Ok, I’m waaaay behind here.  The GCM is in two months time and I’m still staggering around like an old man… on valium.

BUT, having said that, I have made some purchases of late that have been a big help.  The first is an elastic knee thingy, which has stopped my left knee from aching after running.

Then there is the water bottle holder which I sling around my waist.  I use a 1 litre bottle, as I learned very quickly that the 600ml bottle that came with the holder jumped about like a branch in the breeze.  The 1lt bottle rests on my hip and doesn’t move an inch.

The bike pants help stop chafing at the top of my legs.  Very important after 5 k’s.  No more running like Mr. Crabs for me!

And in spite of my misgivings I lashed out $15 on a nylon shirt a few weeks ago, and have been very happy that I did.  Sweat doesn’t ‘stick’ to the nylon, and as a result I’m a lot cooler now when I run.

The only remaining purchase to make is for a new pair of shoes.  While I’ve been pretty happy with the New Balance boots, they are nearly a year old now, and the bouncy bits are starting to flatten out.  I was very impressed with the shock absorption qualities of the Asics I bought last year, but I returned them because I couldn’t stop them from slipping off my heels (unless I tied them reeaal tight, at which point it was minutes before my toes went numb).  Might have another go, you never know, they might have changed the model to something more user friendly for those of us with ‘duck feet’ !

Now that I’m kitted out, all I have to do is work on my running distance and speed, while avoiding injuries, people with colds, potholes, out of control motorists, dogs, etc…  simple stuff 🙂