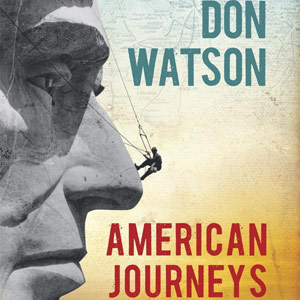 I bought Don’s book in Maleny last year, and slotted it into the pile in the drawers next to my bed.  On impulse I picked it up last week and started to read where Don began his journey around America, by train, car, and train, starting off at New Orleans.

It’s an eye-opening read, and by the end of the book I was left with a feeling of unease about our ‘Bigger Brother’.  Americans’ blind faith in religion and the shonky preachers who demand dollars from the faithful, the rise of the right wing nut cases with blanket coverage on TV and radio, the growing number of hate groups, the desperate plight of the working poor battling to literally survive in an unofficial class war.  The brutality of ruthless corporations.  The futility of their government.  Free speech vs. the right to own a gun and shoot anyone who speaks freely.  So open minded yet so restrictive.  The horrors of their rapidly expanding prison system…

America appears to be a place of wonder, fun, adventure, and hope, but at the same time desperation, terror, futility, ruthlessness and arrogance.  I put the book down and thanked Odin that I live in Oz 🙂  But it was Dons’ words that bought me back to earth:

When anti-American feelings sneak up on you, when you think the democracy is a bit of a sham, the people are ruled by ignorance and fear and no good can come of the place – think of the music.

No people on earth make music like the Americans – no one else comes close.

And he’s right.  In spite of all the things that may concern us about America, they’ve certainly nailed the music!  God bless ’em.