Off to the Movies

Well, it’s been an epic movie watching month for me and Mrs Gb.  This month we’ve been to the movies twice.  The first movie we took in was Couples Retreat.  Not a bad yarn, some close to the bone moments, but, a movie we both generally enjoyed.  And one that made us feel pretty good about NOT being Americans!

Then yesterday we got our chance to see Charlie and Boots.  Gladstone Cinemas managed to wrangle a copy from somewhere, and a couple of months after it was released pretty much everywhere else, we got to watch it.

Now, I’m not a movie reviewers armpit.  I never will be.  I enjoy movies, but not the popular Blockbusters.  The Batman film with Heath Ledger is a case in point.  We hired the DVD, and I spent the night gripping the remote to turn the sound waaay up to hear what the hell Batman and Commissioner Gordon were mumbling, before having to turn the sound way down every time an explosion occurred or a gun was fired, before it punctured our eardrums.  I tell ya, DVD’s should come with a decibel control, so everything is at the one sound level.  Heath Ledger deserves an award for being the only character we could hear, and understand during the movie!  Leave it to an Aussie or a Pom to play a good psychopath I say. 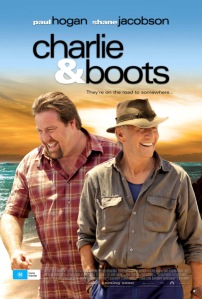 So, it was with no surprise that Mrs Gb and I entered cinema #6 and found ourselves alone in an empty theatre.  Charlie and Boots is an Australian movie, starring Australians.  There are no American love interests, no shots of the opera house, the Sydney Harbour bridge, and North Queenslanders weren’t wearing safari suit tops, and shorts with long socks and white shoes.  What were they thinking?!

It was a good yarn, with a few tear jerking moments, and a few laughs.  What I like in a movie.  As an added bonus I was able to point out to Mrs Gb a few of the places I visited last year on my little trek round the countryside.

Hell, there were even some good shots of Emerald – a place just to the west of Gladstone, and the makers of the film did us proud by not depicting everyone outside of Sydney and Melbourne as gun toting, inbred, rednecks, hellbent on shooting or raping everything and everyone in sight.  Again, what the hell were they thinking?!  All those years of loud mouthed larrikin stereotyping down the drain…

But the best part of our film going experience was discovering we had the entire theatre to ourselves.  So we picked up where the Charlie and Boots producers let us down, and acted like complete yobbos.  We talked during the film, loudly.  I made the odd rude comment without being shushed.  And at one point I was even able to lie down across several seats in total comfort.  How good was that?  Ok, not too great for the Oz film industry, but fine by me!  Can’t wait for the next Aussie offering to make it’s way here…  which will hopefully contain footage of some sunburned city slicker getting shot at by crazed yokels in utes with pigs head glued to the bonnet.  Just like we do every day up here.

So to wrap up – Charlie and Boots.  Go and see it.  It won’t change your life, but it will make you smile, which alone is worth the price of admission.