It’s been a few weeks since my last ride, and my old battery finally died, point blank refusing to start last weekend.  It’s been recharged a couple of times over the last 7 years, but it’s not holding charge for long these days. 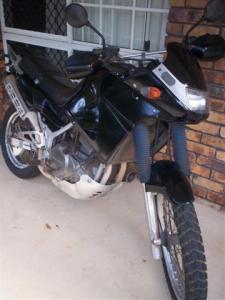 I pedalled to the nearest bike shop, and while I was in there deciding which battery to buy, one of the mechanics ushered me outside and showed me a KLE 500 the same era as mine, that was waiting for work to be done on it.  It had had fallen over and the brake pedal had gone through the clutch housing cover, and some minor damage had been done to the plastic cosmetics.  When he told me how much it was going to cost the owner to fix the bike I nearly had a heart attack.  The owner was toying with writing the bike off, or spending a fortune to fix it.

Here was a perfectly good bike, parts should still be available for it, particularly off an old GPZ 500 for the clutch cover, or many of the parts off the later model KLE’s should also fit, (the design hasn’t changed that much!) and the poor owner was looking at scrapping it.  Bullshit!

Ok, KLE spares are as rare as rocking horse shit in this country, but not impossible to source.  I’ve dropped my KLE on a couple of memorable occasions, and generally the worst damage has been a busted indicator light and/or clutch lever.  There’s a large dent in the left hand side of the tank where my mates’ knee was slammed into it when a Virago 1100 took him out while we had swapped bikes.  No biggie.  It’s one of the things I like about the old girl.  She takes a hammering, and keeps on, well, hammering!

But, most parts I’ve bought over the years, including one of the footpegs that got bent out of shape by the Virago, have come off the thousands of GPZ’s littering most cycle wreckers yards.  It would be a shame to see the KLE in the bike shop scrapped because of a few dinky parts.

The mechanic said the owner was keen to get the bike going again, but the bike shop are probably pushing him towards upgrading, possibly to one of those neato Versys 650’s (although wait til he drops one of those and see what it costs to replace those big lumps of plastic round the tank).

I’ve been toying with contacting the owner and seeing if I can help him get his bike back on the road… (God knows how!), But on the other hand, if he writes it off, then there’s a heap of spares for me if I can get my hands on the bike.

You can see what sort of moral dilemma I’m having!