One of the things that I’ve grown used to over in the last couple of years of pedalling is fixing flat tyres.

For some reason, the people of my town seem to like depositing screws, nails, or staples on the sides of our roads and byways and my ‘gift’ is finding them, then puncturing my inner tube with them 🙂

My puncture repairing skills went into overdrive after purchasing a set of mountain bike road tires, of the Maxxis brand.  Great tyres, increased speed, good grip, and pretty snazzy coloured lettering on the sides (no, I didn’t buy them because of the lettering… but it did help!) I was rapt with them.

A sight I've grown 'tyred' of seeing, another Flat Maxxis 🙂

The only problem with them was keeping the damned things inflated.  At least once a week, I’d walk out to my bike to find a tyre had gone flat, usually the rear tyre.

I’d sigh, then fix it.  After several weeks of gluing patches onto my tubes, I lashed out and bought two thorn proof tyres.  They worked quite well.  I was only getting punctures every 2nd week now…

Then one sunny morning I turned to my wife and said, “Today’s the day!  I’m pedalling to Tannum Sands!”  Tannum being our local beach some 20 odd klm’s down the road.

I gave Pubtruck a quick once over, tossed my puncture repair box, some snacks and a towel into the case on the back and set off.  11 klm’s later the inevitable puncture occurred.  I pulled over near a small bridge, and popped the tyre off.  Yep, a large piece of wire was sticking out of the tube.  No worries, I had my trusty repair kit.

I popped open the kit, and noted that I had 3 patches left, plenty to get me to the beach, then back home again.  Popping the tyre off, I had the tube out in no time, and was somewhat dismayed to discover that the wire had created 4 holes on it’s short journey through my inner tube.

Okaaay… I managed to stretch a big patch over two of the holes, and used the remaining two patches to cover the rest.  I put it all back together, had a drink, ate a small pack of sultanas, before having a little stroll around the tidal creek I had pulled up in front of.  Twenty minutes later, certain that the glue had thoroughly dried, I whipped out my little hand pump, and started to inflate the tyre.  It went up.  It stayed up.  I got on, rode another 10 or so metres down the road and got another puncture.  This time it was a small rusty screw.

Further along the road I spied a road crew.  Minutes later my wife was winging her way to my rescue as I sat staring at my bike.  It was a nice day, the weather was perfect, the birds were singing in the trees, and I felt like kicking Pubtruck to pieces.  I decided against this course of action.  I would take it apart, put it in the car, then take it home and set to work on it with some of the more serious tools in my shed.

I didn’t of course.  In the end I persisted with the tyres, but as well as carrying a fully stocked (jammed packed with patches) puncture kit, I also carried two spare tubes with me wherever I went.  The number of times those tubes came in handy over the last couple of years are beyond number.  One tube was retired a few months ago because it was literally covered in patches, and almost double its’ original thickness.

But this morning, I strolled out to the shed, and found the rear tyre flat again.  This time I didn’t repair it.  I took both tyres off, inserted the two spare thorn proof tubes, and replaced the tyres with my old knobbies.  I have officially given up. 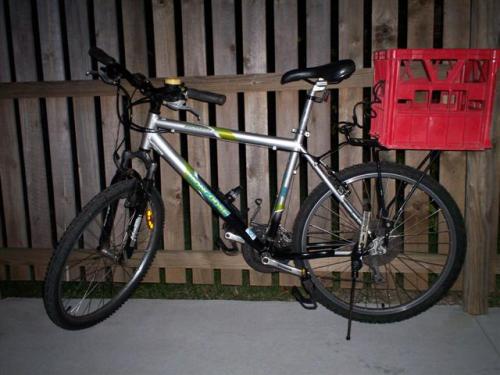 The knobbies mean my top end speed will be approximately 5 kph slower, but they should provide me with the reliability that I now crave.  And as an added bonus, on the odd occasion when I’m pedalling on wet surfaces, they won’t spray a constant line of muck directly onto my face.  In addition to this, I’m now dirt track capable again.  I’m back baby!

Tomorrow is another cycling day and I can hardly wait to hit the trails out the back of our home.  With a bit of luck the ol’ tyres will still be up when I stroll out to the shed…

Filed under Mongoose Pubtruck, Out & About