When I bought my bike back in 2003, I wasn’t looking for another bike.  I was visiting Hervey Bay, saw a bike shop and popped in to buy some bits for my XT 600.  I saw the KLE 500 sitting along the fence and thought, “What the hell is that?!”  I bought the bits for the XT and mentioned the KLE to the bloke behind the counter, “Come with me,” he said. 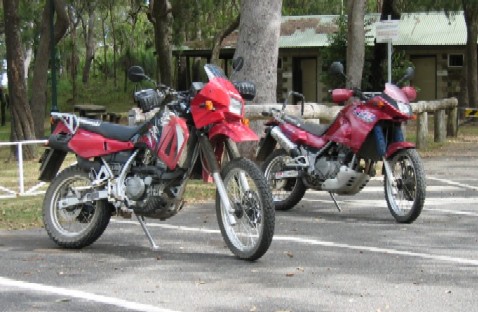 I sighed a little bit, because I wasn’t really interested, but followed him out to the lot.  He grinned as he inserted the key and fired it up.  Well, it sounded fantastic, “What do you think of that note?!” he asked over the rumble.

I was grinning from ear to ear… “How much?”

“Take it for a ride and be surprised,” he said.

I shook my head, “Nah, you’re right mate.”  Then I sailed off back to the unit.

That afternoon while my family lay resting, I sat looking out over the water thinking.

The XT is a good bike, but to kickstart it was a bugger (especially on cooler days), the tank was too small for highway use, which I’d been doing a hell of a lot of lately… with a lot of anxiety between service stations.  ‘Ah, what the hell!’

Minutes later I was sitting on top of the KLE, happily revving it and loving the sound of those twin pots roaring through the exhaust.  The pipe was a straight through affair, loud as hell, but legal… apparently.

The salesman took a road bike from the lot and I followed him out of the yard, through the burbs, and to a long and twisting road.  The KLE couldn’t keep up with the road bike on the straights.  It lacked the punch of a proper road machine.  But when we hit the twisty stuff, I was right up his arse, which sort of surprised both of us.  The smile on my face was threatening to lift my head off my shoulders.

Now, my riding experience was pretty limited at this stage, a couple of bush bashers as a young bloke, and a very short amount of time on a GPZ 1100.  A few near death experiences on the GPZ convinced me that I couldn’t be trusted with raw horsepower (mind you, that street fighter is now listed as ‘a trusty old cruiser’ in the bike sales mags!), so I’ve limited myself to mid-range bikes ever since.  The XT was perfect, except for its’ ability to chew up big k’s on the open road… and that damned kickstarter.

I liked the KLE so much that I bought the thing.  Since then I’ve clocked up a stack of kilometres on it.  In fact my first ride was from Hervey Bay to Melaney a couple of weeks later when I returned to pick it up.  I rode straight into a storm which lasted the entire ride.  I didn’t care.  The bike ran well, used bugger all fuel, and the next day when the skies cleared I hit the twisty roads on the Connondale range and was so thrilled with the experience that I turned around at the top, rode back down and did it again.

Heaven is a sweet running bike, a smooth, curving road with no traffic, the sun at your back, and the promise of good companionship and maybe a few beers that night.  I could hardly wait to get back out there. 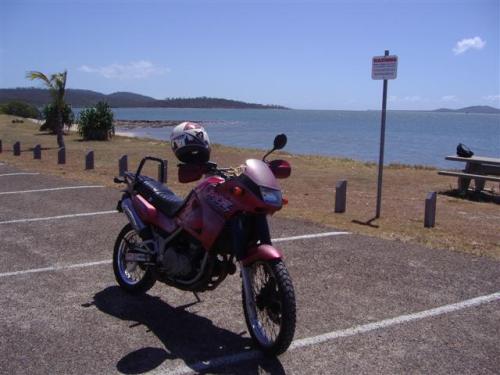 Since then, I’ve done a stack of rides, had some great adventures, met some weird and wonderful folk, and visited places that I’m blowed if I can find again!   The old girl has changed a little as well.  It’s been rebuilt, had a new coat of paint, and a new exhaust fitted… which still sounds good, but nowhere near as noisy.

Would I get rid of it?  Dunno.  I like the new V-Strom 650’s, and the BMW 650’s.  And I think the Kawasaki Versys 650 would be a dream to ride.  But justifying the expense of a new bike when the old KLE can still get me everywhere I want to go?  And I don’t have the worry about stone chips, scratches, or someone stealing it 🙂

It’s light, easy to ride, and while it will never be a speed machine, it is super reliable, economical, and quite comfortable… after I had the seat remodelled!  So, I’ve sort of grown attached to it and might just hang on to it and see just how far we can go together. 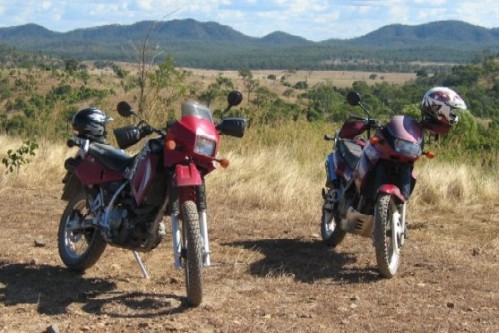