Morning in Crystal Waters is magical.  I woke early, the lyre birds were whipping and warbling in the garden next to my window, God was in His Heaven and all was right with the world.  Ten minutes later I was on the track, trusty cane in hand and wandering through some of the prettiest countryside in the world. 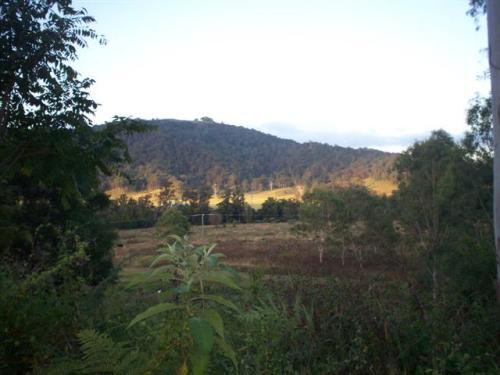 There is a small system of roads throughout the village, and everyone who passed by waved cheerily at me.  Life is good.  The only black cloud on the morning was the smell of death near one of the village ponds, and as I passed over the causeway I could see the bloated corpse of a dead kangaroo.  I held my breath and continued on.

At the entrance to the village is a small bridge, and the creek was flowing slowly under it.  I sat there for half an hour listening to the water burbling and trickling over the stones, thinking, I could do this every morning.  I hadn’t felt so relaxed in ages.  I thought about my workmates, it would be their first dayshift today, and immediately felt my stress levels rise.  Quickly I focussed back on the water, the trees, the sound of cattle moving about in the long grass nearby, and my blood pressure dropped.  The line from Clancy of the Overflow rang through my head, “And sometimes I rather fancy, that I’d like to change with Clancy, like to take a turn at droving where the seasons’ come and go…”  Yeah, even Banjo had a dream of changing careers.

Returning to the mates place via a couple of bush tracks I hadn’t walked before, I made breakfast and asked what the plan was for the day.  I was surprised to learn that The Hermit was going into town (Maleny) for his weekly shopping trip, so I offered to drive him in.  By the time we did the shopping, had a mid-morning coffee, bought a couple of books from The Rosetta Stone bookshop, and visited his parents on top of the range, it was lunch time.  Time to head back to the tranquility of the village.  On the way down the range, we stopped to pick up an old hippy hitchhiker.  She jumped in, sitting on top of my old mate Ted (the knitted bear), and we drove her to Conondale.  She was grateful for the lift, and I was grateful when she got out.  The smell hung around for a while though…

As we drove past the pond I pointed out the dead ‘roo to the mate, “No worries,” he said, “I’ll get on to the committee.”  I was impressed, a committee that actually ‘did stuff’ would be a first for me.  Several phone calls later he turned to me and said, “I don’t think anyone’s real keen on tackling this problem.”  I laughed my cynical laugh and said,  “Looks like it’s up to us then.”  Yep.

Near the dam wall we dug a hole, and I waded in to drag the carcass out of the water.  Because it had been in there for a little while, it came out in several large pieces.  So I was forced to rake most of it through the weeds and onto the road.  The smell was mind blowing.  We buried it and headed home for a quick wash down under a tap and a few consolation drinks.

I’d had a couple of beers, and as the sun was still high asked the mate if he needed any jobs doing before I went for a stroll, “Yeah, we can cut some timber,” he said delightedly.  Nice one, I don’t mind swinging an axe every now and then.  Half an hour later I threw the axe down, then threw myself down next to it.  Bloody hellfire!  We had cut a good stock of timber and piled it neatly near the house.  A large mob of roo’s watched us as we hacked away, the chief of the mob was a monster of a buck who stood pretty close to 6 feet tall, and my mate has nicknamed him “The King”.  The chest and arm muscles on this roo stood out in perfect relief, he looked a bit toey too, like a prize fighter who’d taken a few too many to the head.

The rest of the afternoon was spent reading, drinking, eating lumps of cheese and napping.  All that good healthy stuff.  Before sunset, I grabbed my walking stick and sallied forth for one more tour of the village.  The sound of the birds, the smells and the colours of the bush in the afternoon sunset are still fresh in my mind.  I felt at peace with the world and myself.  Lovely.

Crossing the causeway where we had buried the ‘roo, I was surprised to see ‘The King’ sniffing around the freshly dug grave.  He saw me, and started sniffing the air.  I was upwind from him, and it dawned on me that I would stink of his dead mate as well… shit.  He stood up, beat on his chest then bounded toward me, stopped, sniffed the air, and started to look a little upset.  Now, I’ve never seen a roo upset before.  In fact I’ve only ever seen trusting docility on the faces of any kangaroos I’ve ever seen, but trust me on this, this was one pissed off kanga.

I looked at him, looked at my dinky walking stick and thought about my chances if things went wrong.  Not good.  What to do?  I chickened out.  Backing away slowly I noted a small track which skirted round the edge of the pond.  I strode down it, turning every now and then to check on ‘The King’.  He was following me.  I upped the pace, and he stayed with me.  About twenty feet behind.  It dawned on me that I was heading into a wild part of the village.  Tall trees, long vines and thick shrubbery surrounded me, and it was getting dark too.  Great.

Upping the pace to just short of running, I burst out of the forest into a camping area full of playing children and mothers.  They looked at me like I was some sort escaped convict and stopped dead in their tracks.  Smiling, I sachayed through the group, and made my way up a small hill to where a group of caravans stood.  I was lost, but at least the roo had gone.

An old man saw me and waved to me to stop so I did, and he came over and asked me who I was, who I was staying with, and where I was going.  Normally I don’t like this type of thing, but part of the deal in staying at the village meant that you had to be sponsored by a resident, in order to prevent any nasty types from running amuck.  Once he knew where I was staying he relaxed visibly, and we got to talking about the community.  His set up was a little spartan, but comfortable enough in a bush/farm sort of way.  Hot water was made by heating buckets over a campfire, and his bath sat in a little secluded clearing, natures’ bathroom.  I don’t think my wife and children would like to use it though!

Evening over the pond

He gave me directions back to the mates’ place and I arrived after dark, refreshed, relaxed, and invigorated.  I cooked tea, and we sat for a couple of hours reading, chatting, and thinking.  It was a pleasant way to spend an evening.  I once asked him years ago, “Mate, what do you do there of an evening without tv, or radio?”  His response:  My nights are filled with joy.  I can see his point now.

Tomorrow night I would be back home.  Surrounded by my family, and back to the routine of running a house, chasing schedules, having to be here, or getting ready to go there, work, routines, responsibilities and jobs, jobs, jobs.  There would be the chaos of noise from trains, cars, stereo’s, trucks, and planes, all the sounds you get used to hearing in the suburbs.

I sat outside on the verandah on my own in the silence for a long time… “And sometimes I rather fancy, that I’d like to change with Clancy… like to take a turn at droving where the seasons come and go…”