Regular readers (Hi Mum!) will have noticed that I’ve been a bit quiet online over the last week, and the reason for this was the annual Gladbloke Family Holiday.  This year, we packed the family chariot and choogled down to the Sunshine Coast for a week of fun and relaxation.  Great stuff!

The family were thrilled with the accomodation, in spite of the fact that a construction crew were present on the site next door for the duration of our stay.  Still, apart from the noise, dust and diesel fumes, all of us actually took a bit of an interest in the building process required to get another set of luxury units up and away.  It was an education.

So, what has the title of todays’ blog got to do with us lounging around the pool at the coast?  Well, it relates to the tale of two tree fellers, or axe men, from the good old days.  The story goes:

Once there were two axemen (bet you didn’t see that coming : ) who started working together at the same time for a farmer.  Their job was to clear a stand of trees to make way for a paddock which would be used for grazing.  The men set to work immediately, cutting furiously away at the trees, and it soon became evident that they were evenly matched in the skills of the tree felling department.

The only difference seemed to be that while axeman #1 didn’t take any breaks, preferring instead to chop merrily away throughout the entire day, axeman #2 could often be seen to be sneaking off fairly regularly during the day.  Now, even though #2 was obviously having more breaks, his quota of trees felled was equal to that of #1’s tally.  Now #1 watched his workmate carefully, and noted that they both swung their axes at roughly the same rate and same force, but for some reason #2’s axe seemed to chew through more timber.

#1 started to get a bit miffed by this, and doubled his efforts.  Really hacking into the lumber.  #2, responded by upping his rate slightly as well, and took even more breaks.  The result?  Same amount of timber cut at the end of the day.

#1 axeman was by now understandably getting a bit upset, so before things came to blows he decided to ask #2 how it was he could have so many breaks and still cut the same amount of timber.

#2 smiled at him and said, “Next time I have a break, come with me.”  So that morning when #2 stopped and slipped off into the shrubbery, #1 followed him.  They ended up back at the farm house, where #2 took a deep drink of water, stretched his arm and back muscles, cadged a little nibble of food from the farmers’ wife, before disappearing round the back of the farm house.  #1 followed him and watched with his mouth hanging open as #2 sat down at a small stone grinder and spent a couple of minutes sharpening the edge of his axe.

The secret was revealed.  From that moment onwards #1 followed #2’s lead, and together they easily cut their way through to the completion of the job.

Well, I’ve been sharpening my axe, and having a bit of a breather.  It’s a good thing to do from time to time.  Particularly as it’s all too easy to get caught up in the excrutiating minutiae of everyday living.  Little things start to get you down, niggle at you.  Relationships get tense, work becomes a drudgery, and even hobbies can lose their appeal when you feel tired and overworked.

It’s good to take some time out and just ‘be’.  Think, play, laugh, eat, drink, walk, talk and sleep.  I’ve read some great books, spent a lot of time with the girls swimming, walking, exploring, and, so help me, even shopping.  We had some ‘time out’ where we just did our own thing, (me = read & sleep), and we came home feeling pretty damned good.

Of course the house still looks like a bomb site, furniture every where, kitchen unfinished, and a stack more work lining up and demanding my personal and immediate attention in the not too distant future.  Work beckons as well at the factory. 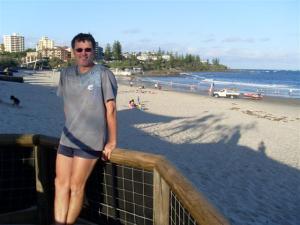 Does this bloke look stressed?

I gave work a little thought during the week.  This was the year of the long awaited event, ‘The Promotion’.  It didn’t eventuate due to some interesting circumstances, and I ended up jumping ship to another section to a lower position back on the tools.  This change is a major step backward careerwise, but a huge step forward personally.  I’m no longer worried about the stress and pressure of my old job.  Ok, so the new job has it’s own share of problems, but nowhere near as many as the ones in my last position.  I don’t lie awake at night worrying about ‘stuff’ anymore.  It’s nice.

And speaking of nice, I’m a much nicer person.  I actually don’t mind answering the telephone these days, as opposed to flinching every time it rings.  My family don’t bug me anymore, I like talking to them, and listening to them now.  I’ve got time to wind down before coming home from work, and in doing so, am ready to interact with my loved ones, not try and avoid them for an hour or two while I try and slow my thoughts from cyclone to mere whirlwind.  Life is actually pretty good.  This took me by surprise when it struck me sometime Wednesday morning as I strolled along the boardwalk at Kings Beach.  I actually laughed out loud from the sheer joy of it, surprising the bloke in front of me who thought I was laughing at him.

So for those of you out there who are thinking that you are too busy to take a break, or have a little time off to spoil yourself, I would like to ask you to think again.  You can cut a lot of timber, very easily, when your axe is sharp.

3 responses to “Sharpen the Saw”